Sculptures are tactile, three-dimensional objects that are molded, welded, cast, assembled, or modeled with malleable or stiff materials. Sculptors would traditionally use clay, stone, metal, plastic, wood, glass, or fabric, among other materials, to create a work of art. 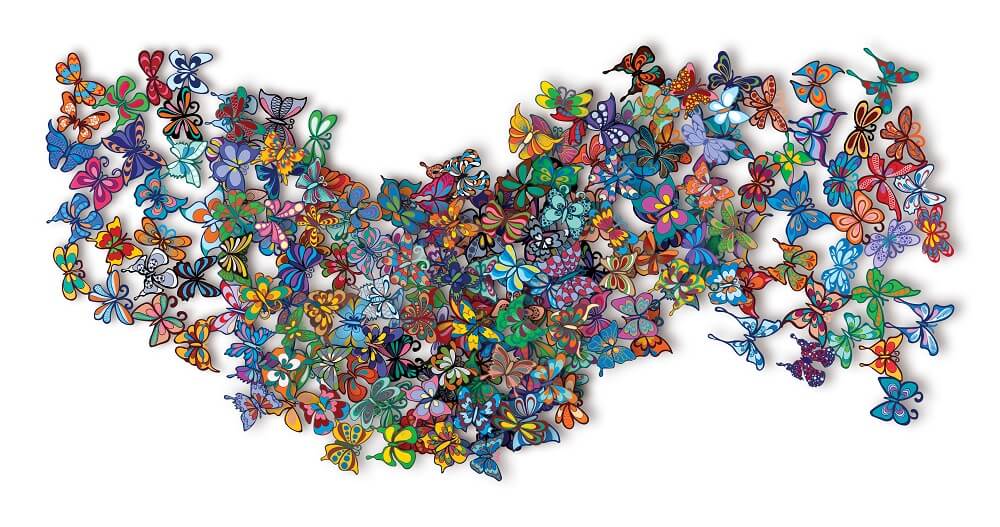 While several elements make up the fundamentals of sculptures, but they’re being challenged by modern sculptors. Let’s explore the different elements of sculpture and what they mean to the design world. 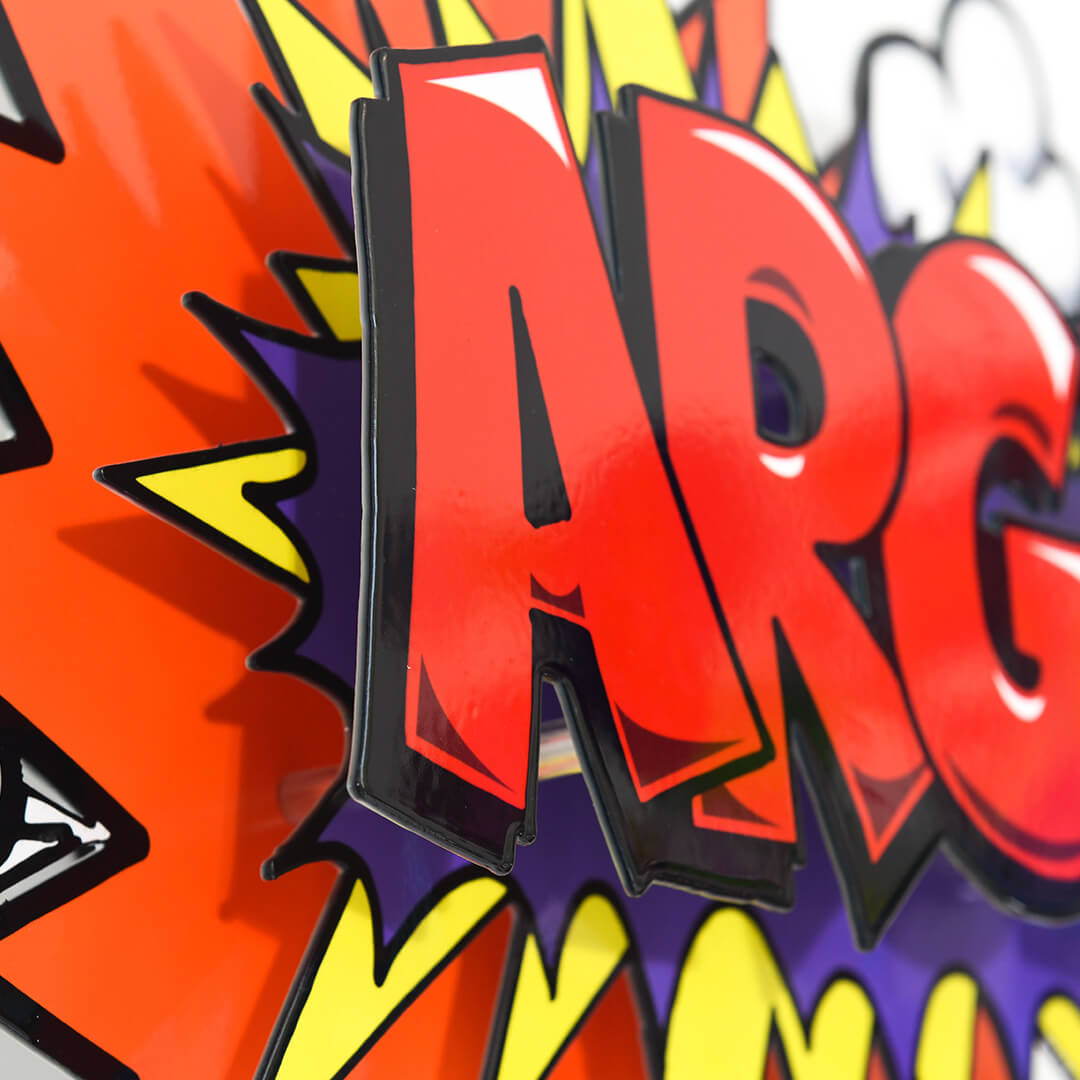 The two most important elements of sculptural art are mass (the bulk and overall form of the sculpture) and space (the areas that exist in and around the sculpture). Over time, sculptors have played with different ideas of what these elements mean to them.

Let’s take a look at how the elements of mass and space have evolved.

Once an essential feature of sculpture, representation was a key factor in creating sculptures. These representative elements often mimicked the true nature of humans, animals, or inanimate objects such as houses, utensils, or fruits. 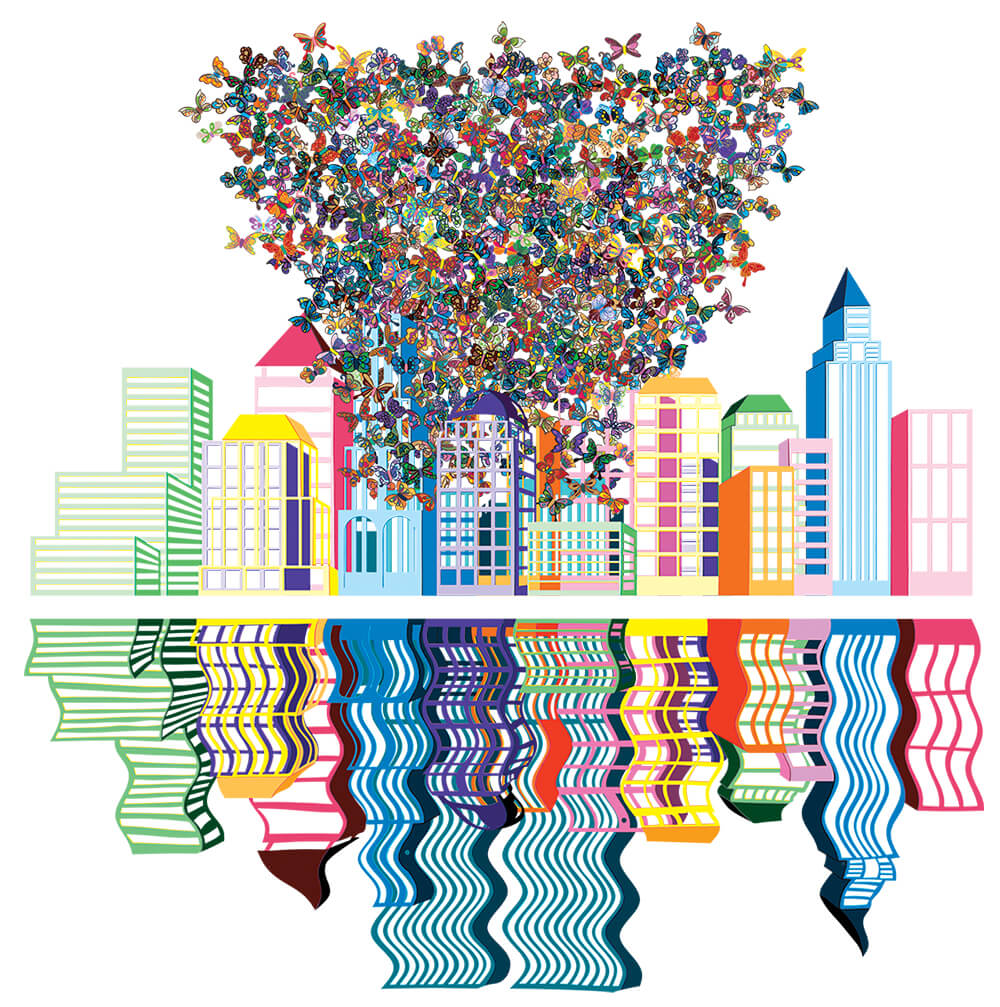 Today, modern sculptors incorporate everyday objects or living things as non-representational forms that do not have to bear semblance to the actual forms they represent. Such sculptors rely on a purely inventive and abstract perception of the world. This approach has been used in avant-garde sculptures such as Louise Bourgeois’s Rabbit.

Before the 20th century, sculptures were primarily viewed as large solid forms or masses of freestanding art. Negative spatial elements such as hollows and voids that appeared around and between the sculptures were given secondary importance. 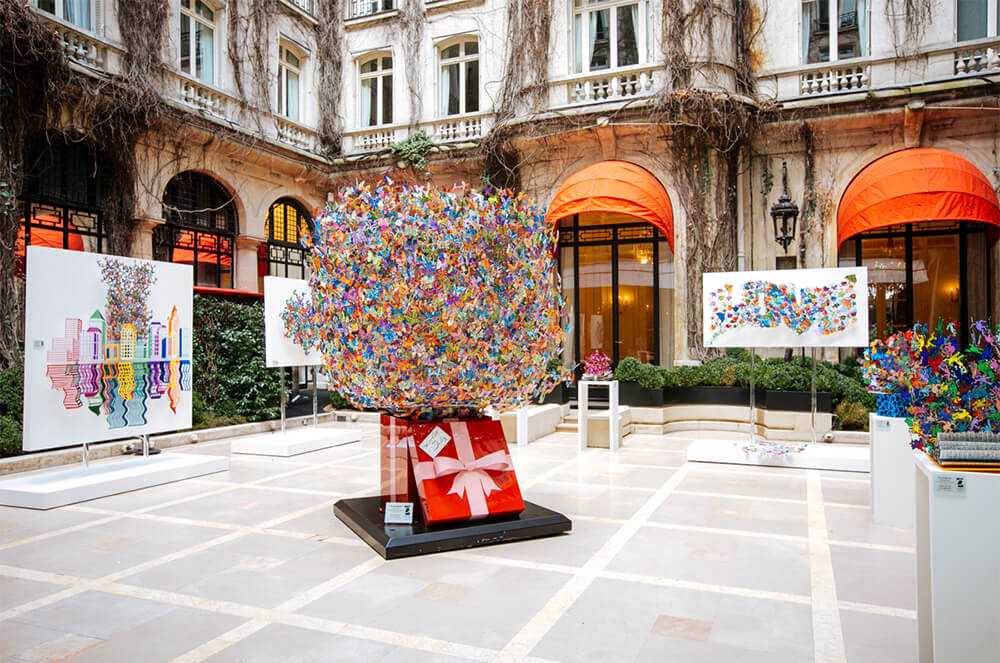 Unlike their ancestors, modern-day sculptors use spatial elements as dominant factors. With more creative freedom at one’s disposal, sculptors are taking advantage of the fascinating nature of negative spatial elements. This is perfectly demonstrated in Bruno Catalano’s  Les Voyageurs.

The elements that dictate the fundamentals of what sculptures should be are, in essence, still important but not entirely a prerequisite. There’s more room for experimentation and creativity, thanks to man’s fascination for constant reinvention.

How Many Sculpture Elements Are There?

Sculptors and sculptresses such as Leonardo da Vinci, Michelangelo, Louise Joséphine Bourgeois, Camille Claudel, and Gertrude Vanderbilt Whitney are just some of history’s virtuosos who shaped the art world as we know it.

For centuries, artists and scholars convened to discuss, debate, and fashion the aesthetic fundamentals of art. While several of their ideas are now obsolete, the basic elements of sculpture still hold their ground.

The elements of sculptural design create a blueprint of sorts that sculptors rely on to create works of art. Let’s explore these elements in detail:

Space is determined by the area, distance, and space that surrounds the sculpture. Additionally, volume determines how much space the sculpture will take up.

The sculpture’s materials either reveal natural colors or those created through emitted light or reflective surfaces. The colors include a family of variants such as hues (the colors produced by mixing or introducing pigments), saturation (intensity of color), warm vs. cool colors, value (the light and dark aspects of a color), and complementary colors (colors directly opposite each other on a color wheel). 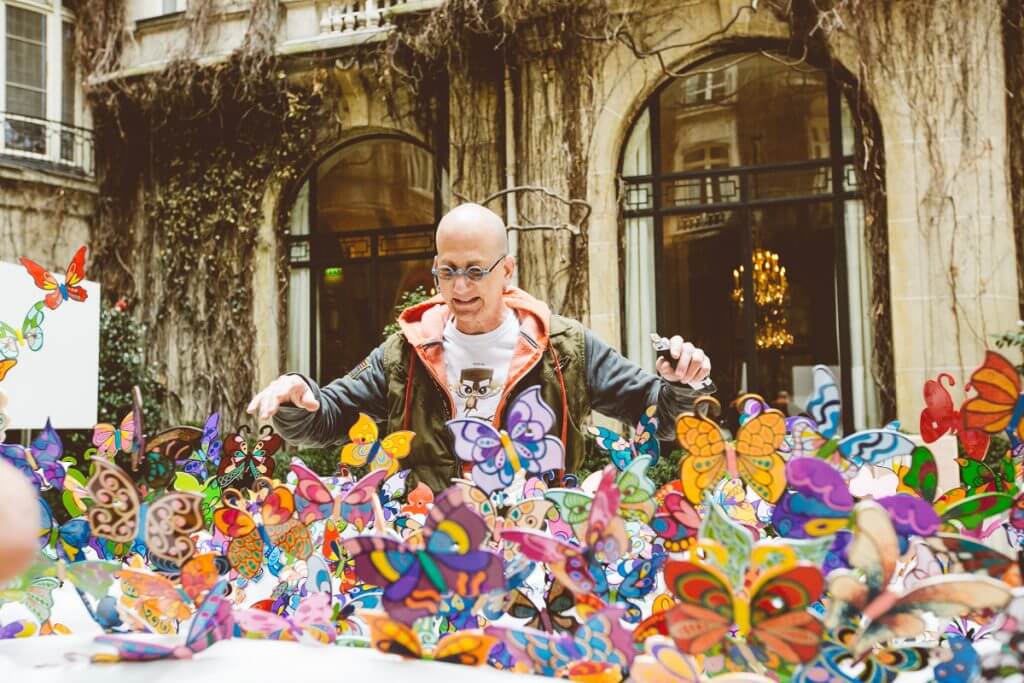 The base that the sculpture sits on is determined at the start of a project. Sculptors use stone slabs, steel sheets, cardboard, or plywood, to name a few.

The sculpture’s width, height, and depth are either predetermined or produced organically to create 3D forms. These could be natural contours that exist in nature, such as naturally occurring or biomorphic shapes such as clouds, riverbeds, mountains, animals, humans, or trees. Geometric shapes with artificial details such as triangles, angles, pyramids, squares, or cones are also used in sculptures.

The physical nature of a sculpture’s surface—smooth, grainy, rough, or soft—determines how it feels to the touch. There are different ways to produce texture. It can be simulated to make the sculpture’s surface appear as something it’s not. The sculpture could also carry textural depth through layered or overlapping elements such as paint, paper, or sand to create strange or familiar sensations. 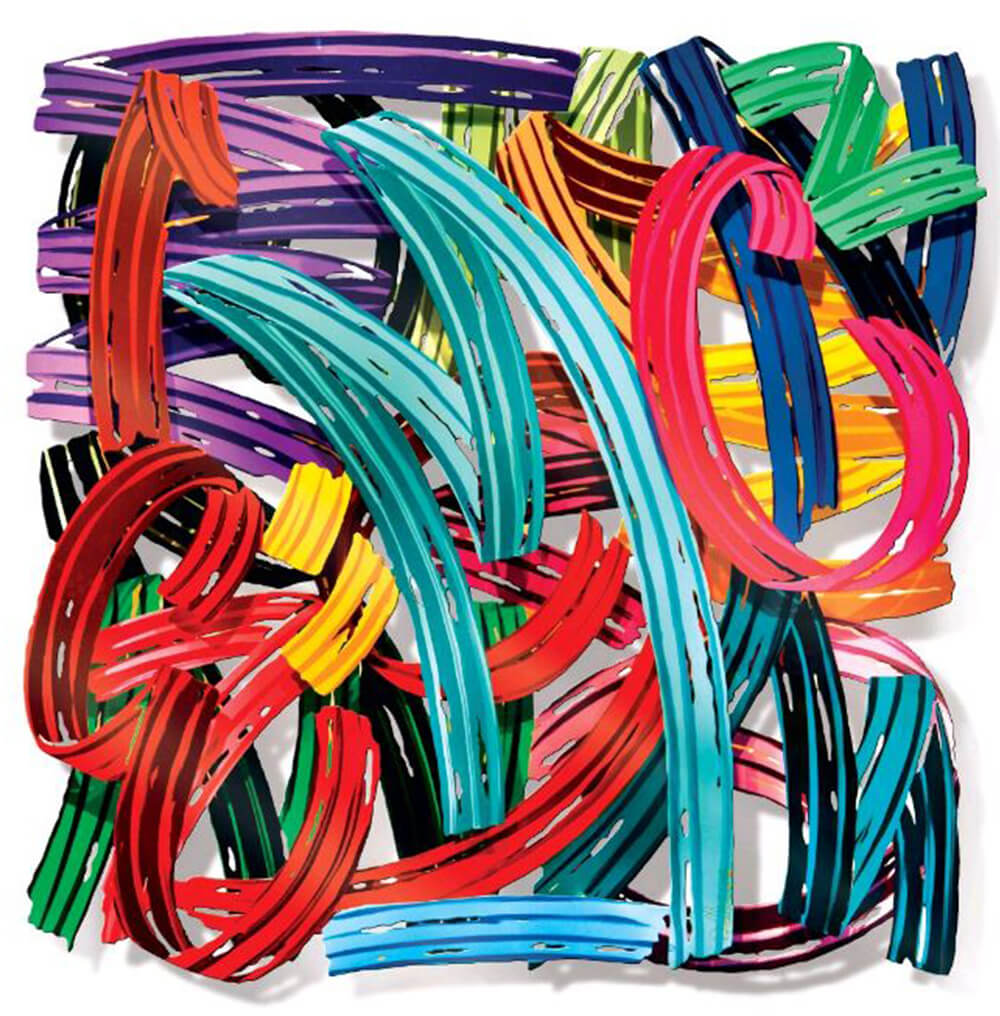 Sculptures can feature multi-directional or one-directional paths to determine whether it is a 2D or 3D form. Suggested lines like edges or those that imply a directional flow are introduced through curved, straight, or movement lines.

Movement is determined by how the sculptor positions elements to create motion. This is demonstrated by creating an optical illusion with overlapping figures or repetitive shapes. Another way to show movement is by positioning sculptural forms to imitate natural motion such as running, walking, or dancing.

Value is the relationship between light and dark tones and the degree of a color’s lightness and darkness from white to black. This is determined through reflected light (natural or ambient), mood (using color to specify a particular feeling or state of mind), shading (making a form look more solid), and chiaroscuro (how light-dark contrasts determine a form’s volume).

The elements of sculpture dictate the balance, rhythm, and harmony of a work of art. Artists are pushing the boundaries of what these elements mean to them by expanding the realms of human creativity. This is evident in the works of Boston-bred sculptor and artist David Kracov.

The sculptor’s work carries a classic 90s nostalgia that will instantly take you back in time. Created with vivid colors, immaculate craftsmanship, relatable humor, and emotional depth, Kracov’s work is equal parts fun and heartwarming.

His 3D wall sculptures are a testament to his exciting career in design. Every sculpture is meticulously crafted with tiny hand-drawn sketches that are cut from sheets of steel. Just like the animated characters he once created as a designer, no two sculptural pieces look alike. This is also true for his free-standing sculptures that erupt with beauty and palpable energy.

The elements mentioned above will help you see sculptures in a whole new light. With inventive sculptors and sculptresses such as Damien Hirst, Jeff Koons, Joana Vasconcelos, and Paige Bradley on the rise, there’s an exciting future of endless artistic possibilities waiting to be unraveled.

What is three dimensional art sculpture?Sculptures